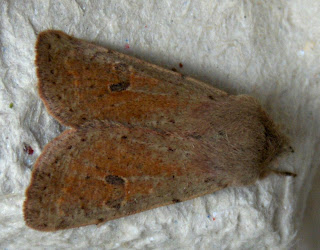 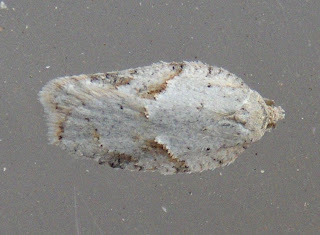 Not as good a night as previous and I only put 1 trap out. Our area in East Bedfordshire can be a little exposed at times and any wind(up to 17mph) seems to hamper the mothing somewhat.
Having said that, Small Quaker (top) and Acleris kochiella/logiana? were new for the garden-
Thanks for the heads up on the Micro ID Ben.
NB....."I think this is Acleris logiana.
Andy Banthorpe recorded this at Flitwick Moor, on 5 July 2009.
This was until recently a "Scottish highlands" species. You may recall, at the Lower Stondon meeting,
that I mentioned that it has moved into southern England in the last few years (probably spread west from
Europe, rather than south from Scotland)
Acleris kochiella is white in the first (summer) generation, but more grey in the autumn/over-wintering generation"
David Manning
Posted by Broom Birder at 8:52 AM